, /PRNewswire/ -- , the leading business-to-business music platform, and (NASDAQ: RSVR), an award-winning independent music company, today announced a new deal that will make Reservoir's publishing catalog of over 130,000 songs available to customers on Adaptr platform. Adaptr provides an end-to-end solution for startups and emerging app developers looking to integrate music quickly and legally into digital experiences including fitness apps, games, and social media. The plug-and-play platform is equipped with a pre-cleared catalog of music and tools including streaming infrastructure, reporting, and royalty payments. 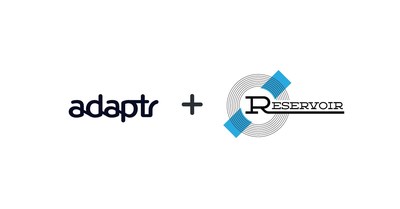 We're driven to help apps and brands create the next big thing, and make sure labels and publishers get paid.

"We're driven to help apps and brands create the next big thing, and make sure labels and publishers get paid every step of the way. It's important to us to protect the catalogs of hardworking artists and songwriters while making it easy and affordable for companies to incorporate music legally. We're thrilled to be able to offer Adaptr clients access to Reservoir's hit music catalog," said COO .

, Reservoir Founder and CEO, added, "Building upon our extensive digital licensing practice, this agreement with Adaptr further diversifies our growth via emerging platforms. We commend Adaptr for facilitating this licensing, so startups can be music compliant from day one, and rights holders can participate in their growth."

This deal follows Adaptr's recently announced partnerships with Merlin, Entertainment One, Kobalt, , and Warner Music Group. Reservoir's 36,000 master recordings, including titles from Chrysalis Records and , are already available to Adaptr customers through the aforementioned Merlin deal.

launched Adaptr.com in 2021 to support startups that need popular music within their apps, with all rights cleared. Adaptr's SDK APIs and SDKs for JavaScript, iOS, and Android enables startups to easily integrate major label music into mobile apps or web applications. Adaptr is currently available to companies that have raised less than in funding and earn less than in revenue.

is for businesses that need licensed popular music to create the most engaging customer experiences in their digital apps and physical spaces. Unlike navigating complex, time-consuming negotiations with music labels and publishers, proprietary streaming platform and SDKs deliver pre-cleared music—compiled by the industry's best curators—complete with user analytics, payments to rightsholders, and legal indemnification for our customers. Feed.fm powers music for the world's leading brands including American Eagle Outfitters, , Mirror, Nautilus and Tonal; and up-and-coming startups use Adaptr to create unique music-based experiences. Our music partners include Warner, , and Cobalt. Learn more at feedmediagroup.com.

Reservoir is an independent music company based in and with offices in , , , , and . It is the first -based publicly traded independent music company and the first female founded and led publicly traded music company in the Founded as a family-owned music publisher in 2007, the company has grown to represent over 130,000 copyrights and 36,000 master recordings with titles dating as far back as 1900, and hundreds of #1 releases worldwide. Reservoir holds a regular Top 10 U.S. Market Share according to Billboard's Publishers Quarterly, was twice named Publisher of the Year by Music Business Worldwide's The A&R Awards, and won Independent Publisher of the Year at the 2020 Music Week Awards.

The company also represents a multitude of recorded music through Chrysalis Records, , and Philly Groove Records and manages artists through its ventures with and Big Life Management.